LAYLI DOVE STANTON OUTRUNS THEM ALL 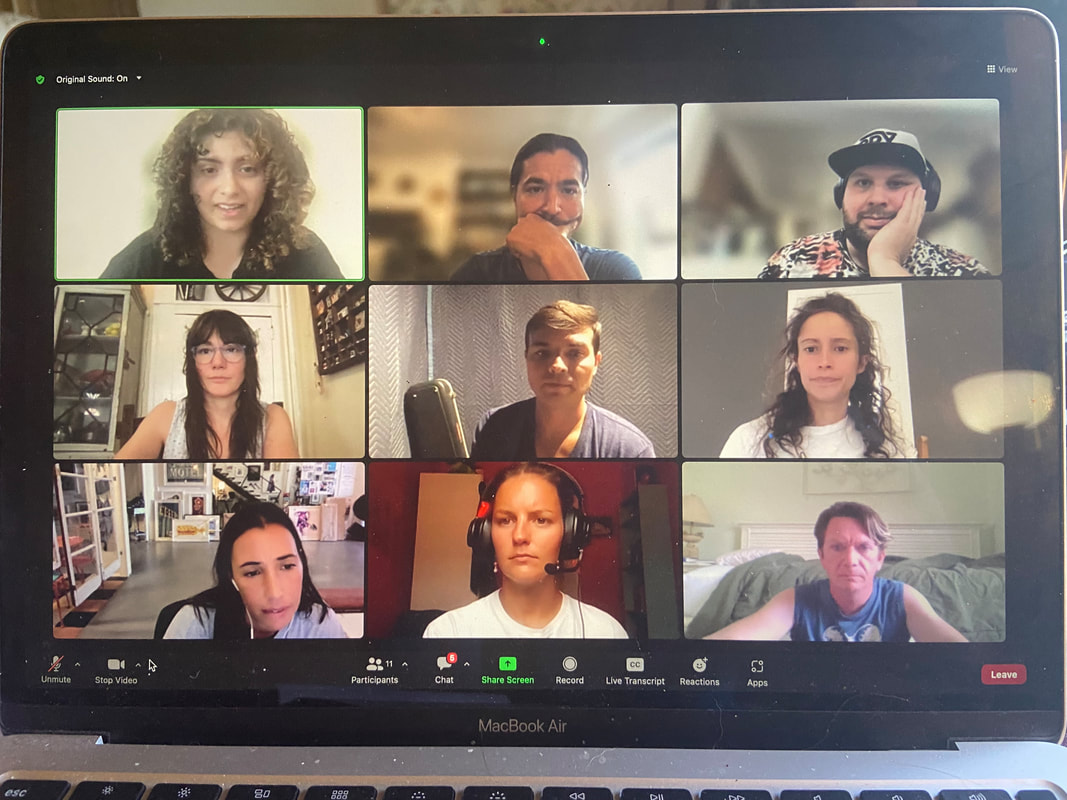 Layli Dove Stanton is a champion from the rez-- a high school track star, went all the way to State.  She's gone missing, and there's only one woman willing to do what it takes to bring her home...

A settler dive bar sits at the epicenter of “The New Wild West,” a North Dakota boomtown on the brink of another bust.  Enter Narissa, a take-no-shit Arikara woman on a mission: to find the missing girl.  She encounters the locals, too consumed by their own dramas to pay her much mind.  They inadvertently expose a grotesquely violent web of greed, exploitation, and betrayal, with Layli Dove Stanton at the center. It is up to Narissa alone to untangle this web, find Layli, and bring her home.

Narissa’s journey is a high stakes and heartfelt story of a Native woman fiercely and tirelessly searching for her missing child in the face of raw, visceral, explosive, and disgusting settler violence and denial.  The mystery of the play unsettles and engages, while the boldly theatrical style also embraces the transgressive power of comedy, pokes a finger in the eye of settler colonialism, misogyny, and environmental exploitation-- systems at once abusive and absurd.

Playwright Suli Holum began this work as an artist in residence at North Dakota State University, gathering stories from folks living and working in and around the oil industry on the Bakken Shale.  A third generation descendent of Norwegian settlers in the Dakotas, Holum also found herself reckoning with her own family's history on these lands. She had the great privilege of interviewing Dr. Michael Yellow Bird of the Mandan, Hidatsa, and Arikara Nation, who remains a project advisor, and Lissa Yellowbird Chase, also of the Three Affiliated Tribes, who opened up about her searches for the missing and murdered through her own organization, The Sahnish Scouts.

Holum has joined forces with Director Ty Defoe from the Oneida and Ojibwe Nations, and Dramaturg Carolyn M. Dunn, PhD., an indigenous artist whose identity includes Cherokee, Muskogee Creek, Seminole and Choctaw Freedman descent on her father's side, and Tunica-Choctaw-Biloxi, Attakapas-Ishak and French Creole on her mother's. Together, Defoe, Dunn, and Holum will bring this story to the stage with accountability, urgency, danger, humor, and heart.  Through both process and performance, the project seeks to be an act of healing and of liberation.  It will amplify the force and fierceness of the MMIW and MMIR movements, while directly confronting audiences with the legacy, and present day crisis, of Missing and Murdered Indigenous Women and Relatives.

Suli Holum (playwright) is an award-winning director, performer, choreographer and playwright based in Philadelphia. Holum was a co-founder of Pig Iron Theatre Company, developing original work between 1995 and 2006 including as playwright for GENTLEMEN VOLUNTEERS, awarded a ‘Spirit of the Fringe’ Award at Edinburgh Fringe and published in Pig Iron: 3 Plays (53rd Street Press). Her first solo show, THE LOLLIPOP PROJECT, was developed through an Independence Foundation Individual Artist Fellowship and a Shell Fellowship in Drama from the National Institute of Education, Singapore. Additional work as a devising writer of new performance includes WANDERING ALICE with Nichole Canuso Dance Company and OEDIPUS AT FDR with Emmanuelle Delpech, FIGHTING FOR DEMOCRACY and FOURTEEN at the National Constitution Center, ONE BEACH ROAD with RedCape Theatre, UK, and A FIERCE KIND OF LOVE with the Institute on Disabilities at Temple University.  She was Co-Artistic Director of Stein | Holum Projects (SHP) with playwright Deborah Stein.  SHP projects include: Drama Desk nominated solo show CHIMERA, developed at HERE, premiered at Under The Radar and toured to The Gate, London; MOVERS + SHAKERS, recipient of the Loewe Award from New Dramatists and developed at UCSD; THE WHOLEHEARTED, commissioned by ArtsEmerson, developed at FringeArts, supported by the New England Foundation of the Arts National Touring Project and Z Space in San Francisco, premiered at Center Theatre Group (LA) and toured to La Jolla Playhouse and Abrons Arts Center.  She is currently a member of Wilma Theater's HotHouse Company. She holds an MFA in Playwriting from Goddard College where she was the recipient of the 2020 Engaged Artist Award. ​

Dr. Carolyn Dunn (dramaturg) is an indigenous poet, playwright, musician, director and actor whose identity includes Cherokee, Muskogee Creek, Seminole and Choctaw Freedman descent on her father’s side, and Tunica-Choctaw-Biloxi and French Creole on her mother’s. She is a founding member of The Mankillers, an all-women drum from Northern California whose cd’s All Woman Northern Drum and Coming to Getcha were released on Without Rezervation Records. In addition to the award-winning Outfoxing Coyote, her books include Through the Eye of the Deer (with Carol Zitzer-Comfort) Aunt Lute Books, 1999), Hozho: Walking in Beauty (with {Paula Gunn Allen, McGraw Hill, 2002), Coyote Speaks (with Ari Berk, H.N. Abrams, 2008), Echolocation: Poems, Stories and Songs from Indian Country: L.A. (Fezziweg Press, 2013), The Stains of Burden and Dumb Luck (Mongrel Empire Press, 2017). Her plays The Frybread Queen, Ghost Dance, and Soledad have been developed and staged at Native Voices at the Autry in Los Angeles. Directing credits include The Red Road and Round Dance, both by Arigon Starr, 49 by Hanay Geoigamah, Sliver of a Full Moon by Mary Kathryn Nagle, as well as Nagle’s new play Sovereignty for Heller Theater Company at Tulsa Performing Arts Center. As an actor, she has appeared most recently Neechie itas, Missing Peace,  Perhaps the World Ends Here, and the world  premier of Distant Thunder. In February, 2019, Dr. Dunn completed a residency at the University of Michigan’s Global Theater and Ethnic Studies Program, commissioning her play Three Sisters, performed by the Anishnaabe Theatre Collective at Sugar Island. Dr. Dunn is currently Assistant Professor in the Department of Theatre and Dance at California State University, Los Angeles, and is Artistic Director of Oklahoma indigenous Theatre Company in Oklahoma City.

The creative team is looking ahead to further development in winter/spring 2023.